The Leicester Blue Sox Baseball and Softball Club will run a Junior Open Day on Saturday 28 June at Western Park in Leicester for boys and girls aged from 5-12, under the auspices of BSUK's Play Ball! initiative.

The day will consist of a number of tryout and competition events for various age groups, based on the following schedule:

10.00 am-12.00 pm: Leicester Schools All-Star Game, with players selected from schools involved in the first phases of the Play Ball! Programme (ages 10-12).

12.00-5.00 pm: Leicester Blue Sox Little League games versus Cartmel Valley (age groups to be confirmed, but there will probably be U15 and U13 games).

During the day, young female players and their parents will also have the chance to sample the Leicester Blue Sox fastpitch softball programme for women and girls, including meeting some of the players and testing their batting skills against the fastpitch pitching machine.

To set up the Open Day on 28 June, the Play Ball! Programme is carrying out a number of preliminary steps in Leicester:

Leicester Blue Sox Chairman Matt Crawshaw said: "We hope this will be great day of integrating young baseball and softball players at one venue, with an exciting menu of games and tryout sessions for boys and girls of all ages."

As well as the chance for existing school participants to become new Blue Sox Junior members, there will also be the opportunity for selected players to represent Leicester schools at the soon-to-be-announced MLB Play Ball! World Series Tournament that is expected to be held in July, featuring Play Ball! Teams from around the country. 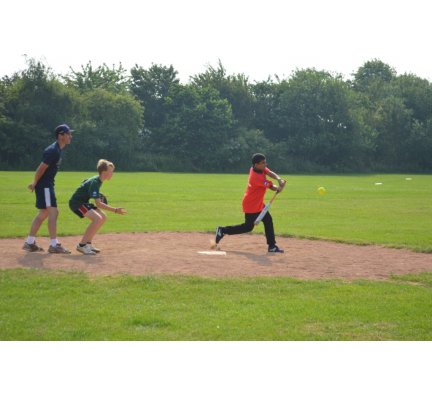 Local workplaces battled it out at the Business Games! Crown Hills Boys Dazzle on the Diamonds at Softball Finals! Leicester Blue Sox return for pre-season training this Sunday 11 January (2pm-4pm) and are looking for new players to add to their ranks. Read More »