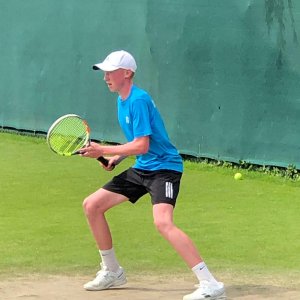 Thank you so much Go Gold for my Complimentary Leisure Centre Access. Now that I turned 16yrs old in April I can use the Gym independently.

I am no stranger to the gym though as I train twice a week in a private gym with my S&C coach. It is useful now though to have the access close to home where I can get up early and cycle to do a 7am gym session before other training is put in place.

We Won. The Centenary Mercury Cup Trophy. I played as part of a 6 strong mixed doubles tournament in 2020. My partner and I won every match in each of the 3 rounds to get to the Final. The 2020 final had to be postponed a number of times due to lockdowns etc. I played for Loughborough Lawn Tennis Club and was a hard fought final but we won taking the Trophy for the first time in 65 years for the Club. We made the papers too, Loughborough Echo and The Leicester Mercury. As this was a postponed 2020 final the New Mercury Cup tournament starts again soon for 2021. I am hoping to play again for the club. 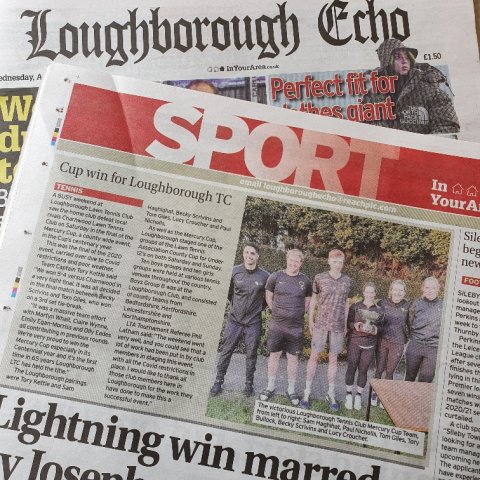 This week it has been glorious sunshine and on Monday I was allowed back on court with my coach Tom. Still outdoors but thats ok for now. We are tidying up and building on my techniques getting ready for National matchplay in April and then a Grade 1 National Competition on the Grass at Surbiton Tennis Club at the end of May. Happy tosay my ranking at the moment is GB 11 U16's so hoping to build on that and looking forward to when I can play in ITFs and travel abroad, hopefully this summer after GCSE completed. 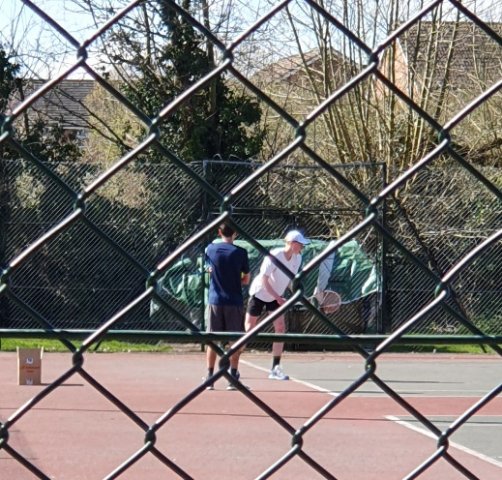 Still in Lockdown Three. My on court training at the moment will not start until 29th March with my coach. So it is still a little bit frustrating.

So trying to keep on top of fitness with plenty of cycling on the Peleton Bike but today I managed to get out on the road now the weather is better,

This was great to be back out. I do plenty of core sessions and strength with the limited kit I have available. So to help me we have bought a new set of weights as in the

picture which I am so excited to use. My S&C coach sets home programs to keep me on the right track. Back to school 8th March so hopefully get the GCSE finalised to be able then to focus on my tennis more. 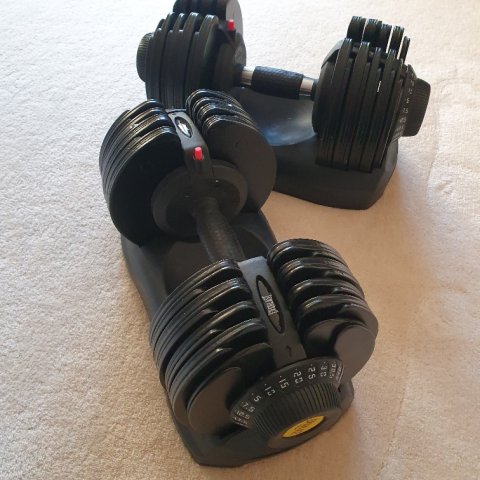 The start to 2021 sees Tennis Courts all closed again so all on court training and competition has stopped. I am working on a strength block with my S&C coach and trying to stay motivated. I catch up with my team and training buddies twice a week on Zoom which helps off court learning. GCSE work carrie's on from home which isnt easy too. I did enjoy fitness last weekend in the snow. 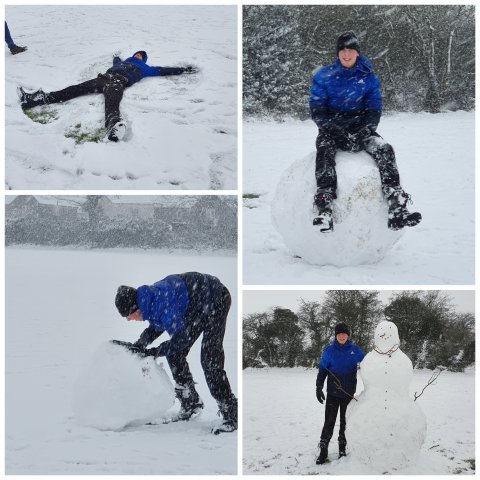 Tennis training in Lockdown 2 is not allowed, all clubs and courts are locked and closed. This is a little frustrating as my training was going well and in Competitions from Sept /October I have managed to moved my GB ranking from a frozen 66 U16 in March to 35 GB in November. In real terms too in my age group I am now currently GB no 14. Now though having to find other ways to keep physical. Walking the dog I do sprints and pull ups on the footy net bars. I have home gym sessions covering core, shoulder injury prevention and stamina on my new Peleton Bike. I join zoom calls with my team at Edgbaston Priory and we plan for mental, tactical play and getting ready to return. I still have to go to school too so studying is a big part at the moment

I am thankful that Tennis is a sport that at the moment is playing in some form during this tough times. I Played in an U16 National Event in Bolton loosing a close 1st match to the UK ranked no 10 boy, 7-6 7-6. I then managed to win two tough matches to get to the consolation draw final. I then got a late call up to play the U18s National event after sitting on reserve. I won my first so got to the last 16 of players where I lost to a player 3 years older than me and ranked no 28 in U18s. It was a good learning experience. Today (Halloween) I have just won a Mens Regional Event in Hull. So onwards to some more training and hoping the proposed UK ITF events will take place at Loughborough University and Stirling for Elite Tennis players to play.

September competitions, back to Team events

A couple of weekends ago I played in the National Premier League U18 Fixture at Ashby Tennis Club, The Ashby Team of 4 players are all 15 yrs old and we came up

against a tough team from Graves, all older, 17yrs/18yrs old. I won my singles and doubles. The team won 2 singles and 1 doubles which then put us at a penalty shoot

out. One player from each doubles plays against the opponents and it is first to 10 clear points. I played this with my partner we put in a very strong

effort but eventually lost 12-10. Great experience but not to be for us.

I have played in 2 rounds of the Mixed Doubles event playing for the Loughborough Lawn Tennis Team. We have won both rounds. The first to a very tough Market Bosworth Team and the 2nd to Roundhill Tennis club. I love playing doubles

During the back to Tennis training season and without any real competitions to get stuck into I decided to give a little bit back to the sport. I have been coached by Martyn Whait at Loughborough Lawn Tennis club on how to be a hitter for a wheelchair player. I hit weekly with Dahnon who is 14 years old and World ranked no 3. He has a strong serve and I help to hit whatever type of balls he needs for his practice to help to progress his game. I also hit at Ashby Castle Lawn Tennis club with a younger boy too. I am hoping that September sees the return to some form of competition for me. This may have to be abroad though at ITF if the UK comps arent available.

Lockdown has been tricky for all Sports Athletes. Coming out of lockdown I am lucky that I can get back onto the tennis court in a social distance way of playing. This is all weather dependant as all training is currently outdoors. I am very thankful to my S&C fitness coach, Jon Coats at P6 Performance. He has kept me very fit with remote sessions during lockdown. Phoning me weekly and providing remote programs and access to equipment to help build my strength. Now we can get outdoors to train then we have done alot of physical movement training which helps me on the tennis court. Some areas of Leicestershire have returned to lockdown, I am lucky this is not me and so I can still get out to train the best I can. 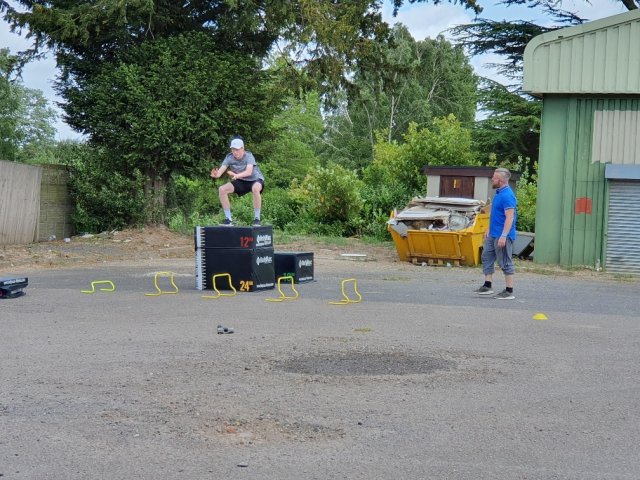 Firstly a big thank you to Go Gold for recognising me and supporting me as an athlete, it is really appreciated. Lock down for any athlete is frustrating but we just need to think a little outside of the box to keep ourselves fit and active and ready to go fully as soon as we are allowed to resume our sports. A tennis player without a court is very difficult. I have an amazing coaching team that are keeping me focused, my S&C coach is helping me in building my physicality and fitness to help injury prevention when i return. My 1-1 Tennis coach is keeping my tennis mind sharp with mental preparation and footwork drills. The photo is of me doing timed sprints in one of my S& C sessions. #staysafe 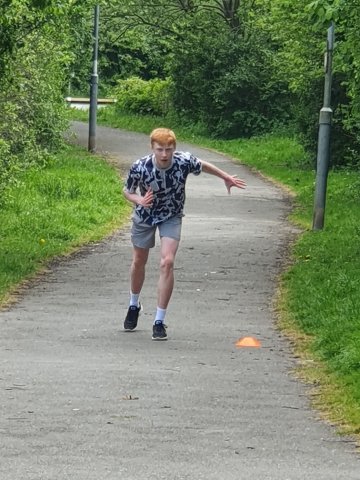 I am currently remote working, so please contact me via email/mobile phone (where provided).